Click a link to listen to Seven Second Circle music. Our album is available for purchase on Bandcamp, or you can always request a free download of the full album by writing us directly.

"Summer In Your Eyes" from the Album "Longitude"

"Bitter" from the Album "Divide"

"Blue Sky" from the Album "Divide"

"Fracture" from the Album "Divide"

"Great Depression" from the Album "Divide"

Seven Second Circle is an American Progressive Rock band hailing from the Pacific Northwest. Forged by the Oregon/Seattle “art-rock” Post-grunge scene of the mid-90’s, 7SC has their our own unique spin on Progressive Rock.

Their debut album is a dynamic representation of what is possible in the world of Prog, creating vast musical landscapes of a wall-of-sound and going to the sheer nothingness of just a heartbeat on the turn of a dime. Throw in a sense of melody that will stick in your brain and you’ve got a recipe that the band is proud to live by.

From soft and folky to hard and extraordinary, 7SC been called Pink Floyd Meets Tool, plus this group of musicians have received preliminary Grammy Award nominations. That’s not meant to impress you, but rather provide the context for the experience you are about to enjoy.

"Voices Overheard" opens with an acoustic Rock sound that puts their passion out in the forefront. The groove builds up and a whirlwind of impressive Progressive Rock riffs come bursting through. The vocals pick up steam along with the Rage Against The Machine like riffs in the background. There's a dynamic tug of war between the verses and the instrumentation with both delivering with their respective slots in the track. "Time Eats Everything" creates an infectious groove from the start and it's purely instrumentation for roughly the first minute. The track is more steady than the opener and keeps on a solid path throughout until around the four minute mark. The sound ramps up and breaks through the clouds of Progressive Rock. "Summer (In Your Eyes)" is an eight minute romp through the vast sounds of the band. The track twists and turns and features some Faith No More like riffs, vocals and time changes. The catchy appeal is off the charts and even though it's eight minutes, it's jam packed full of Rock sounds that keeps things interesting throughout.

Verdict: Seven Second Circle elevate their signature sound to even greater heights via their new EP.

"And once again fellow progheads new growth in the Prog garden is unearthed and exposed to light. Seven Second Circle echoes with early Genesis, Gentle Giant, and the initial work of Kansas because they don't swamp you with layer upon layer of sound built up to be just that -- lots of sound. This is a band that prefers to drill deeper into your thought process and consciousness. Another example of why progressive rock stands apart from other genres; the ability to transform something simple into complex art -- without making you feel inadequate about what you're listening to.

"All kinds of influences are discernible in Seven Second Circle's music but none of it is imitation in any way. So you get hints of Deadwing-era Porcupine Tree, the acoustic elegance of Pineapple Thief, the muscular melodicism of Riverside, Rush and the melancholy of Pink Floyd. There is much here to get deliciously lost in; detail after detail comes to the fore through Jarret Holly's superb mix.

There is an innate modesty to Divide. There are few solos and no show boating by these talented musicians. This is somewhat reflected in the cover art. The bold but simple graphic is as intriguing as the music it contains. The prog here is in the arrangements and the emotional precision expressed by the music. Take the time to appreciate this album and discover your favourite new band. Seven Second Circle's Divide was a privilege to review."

"Divide is a thoroughly enjoyable work of art, the subtle working out of a concept which is gently embedded in all elements and aspects of the recording, the musicianship and the narrative.

One of the immediate and striking qualities of Divide is that it cleverly harnesses the natural power and exuberance of the band and channels it through revolving combinations of instruments and vocals, each blend capturing and emphasising an aspect of the instrument which gives each track its distinctive tone and feel. "

"I have listened to 'Divide' quite a number of times and it’s definitely the New Prog sound and deserves its right in the annals of the Halls of Prog Rock.

The album 'Divide' contains all the components you want in a Prog album and more and Seven Second Circle has all the facets of a Prog band that will definitely deliver time and time again throughout their tenures and tours of duty as Prog ambassadors to a new generation of Prog fans and the Old Guard that holds fast to their copies of Darkside of the Moon and Larks Tongues in Aspic dearly that they will put those down to listen to Seven Second Circle and remember that this is the new sound that is Progressive Rock. " 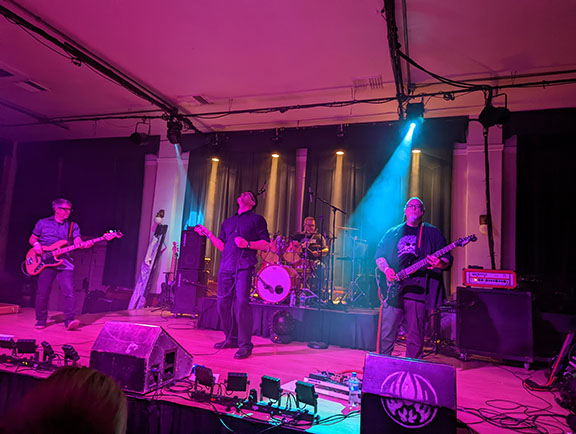 Please contact the band about Shows, Press or to obtain a copy of the album "Divide".